St. Mary’s Singers is an adult choral group which meets for three 8 week terms each year to learn and perform major choral works under the direction of Graham Wadley.

These performances are traditionally on Good Friday, early July (Summer Canticles) and Remembrance Sunday.
Members of the group also join with St Mary’s Church Choir for some major services including the Carol Service and the Annual Wivenhoe Civic Service, normally in October. 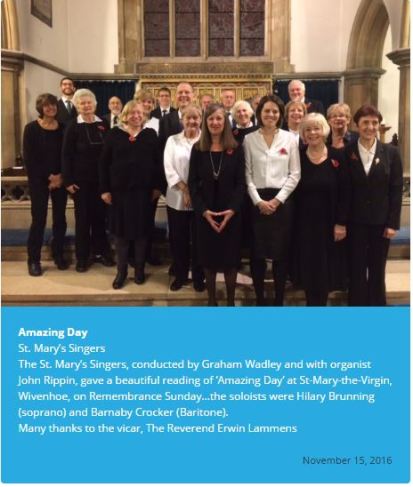 2017
St Mary’s Singers celebrated the 500th Anniversary of the Reformation with a programme of suitable music at the SUMMER CANTICLES in July 2017.
There were extracts from the Reformation Cantatas (79 and 80) by J S Bach, with organ music from John Rippin and piano pieces from John Wolton. Directed by Graham Wadley. 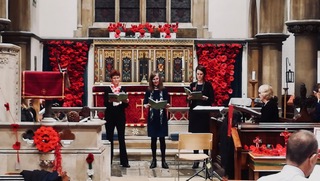 Music for Remembrance
The choir’s concert on the centenary of this commemoration took place amongst hundreds of poppies.

On Good Friday 2019
we performed music by Pergolesi, Saint-Saens, Chilcott and Stainer.
On Sunday 10 November at 7.30 in the evening Music for Remembrance included works by John Rutter, Orlando Gibbons and Bob Chilcottt.

Membership currently numbers 40 singers drawn from Wivenhoe, Colchester and the local area. John Rippin is our regular organist for the concerts.
Soloists for our performances are normally drawn from within the group.
We meet on Thursday evenings in St Mary’s to rehearse and always welcome new members to join us for all voice parts.

There is a small voluntary subscription paid by the members which enables us to cover our costs.
Do look out for details of our latest events and come along to rehearsals for a good sing.
Contact Graham Wadley by email: